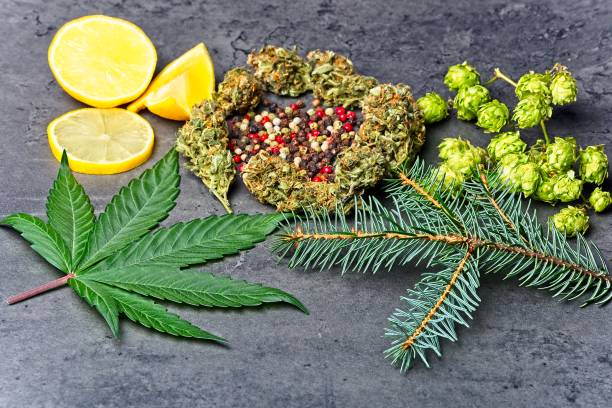 For anyone who has been around cannabis, you know of its distinct aroma and scent. What you may not know is that this is because of the plant’s terpenes. Terpenes are a big, diverse group of organic compounds that are produced by a variety of plants. They are found in a variety of plants, though many people commonly associate them with cannabis because cannabis plants contain high concentrations of terpenes.

Terpenes provide cannabis varieties with distinctive flavors like citrus, berry, mint, pine and other aromas. Over 100 different terpenes have been identified in the cannabis plant, and every strain contains a unique terpene type and composition. In other words, each cannabis strain you find on the shelf at your local pharmacy has its own unique terpene profile. This allows that specific strain to have its own smell, aroma, and most importantly, effects.

No matter the plant, terpenes play a vital role. In some plants, terpenes attract pollinators, while in other plants, they cause a strong reaction to repel predators. We also can find terpenes in products we use more often than just cannabis. Manufacturers use isolated terpenes to create the flavors and scents of many everyday products, such as perfumes, body products, and even foods. As for the cannabis plant, terpenes vary from strain to strain and that is what makes them unique. While some may make you feel drowsy, others can make you feel energized or euphoric.

How do Terpenes Differ from Cannabinoids?

In terms of their actual chemical structure, terpenes are quite similar to cannabinoids, and they are actually produced from the same part of the plant (the resin glands). The main difference lies within how the body interacts with these compounds. Cannabinoids primarily concern themselves with the endocannabinoid system while terpenes offer a more holistic approach to natural remedies.

Why Do They Matter?

The terpene composition of the plant is what makes the strain unique. It is the varying terpene makeup, paired with the different levels of cannabinoids that offer a variety of effects for the user. Have you ever wondered why two strains with the same THC content have such varying effects? This is because of the plant’s different terpene profile. For example, Strawberry Cough and Northern Lights are two different strains that are known to have very different psychoactive effects both having THC content around 20%. While the Strawberry strain produces energetic, uplifting effects, Northern Lights produces an extremely sedative, calming effect. This is a great example of how cannabis can differ in varying strains.